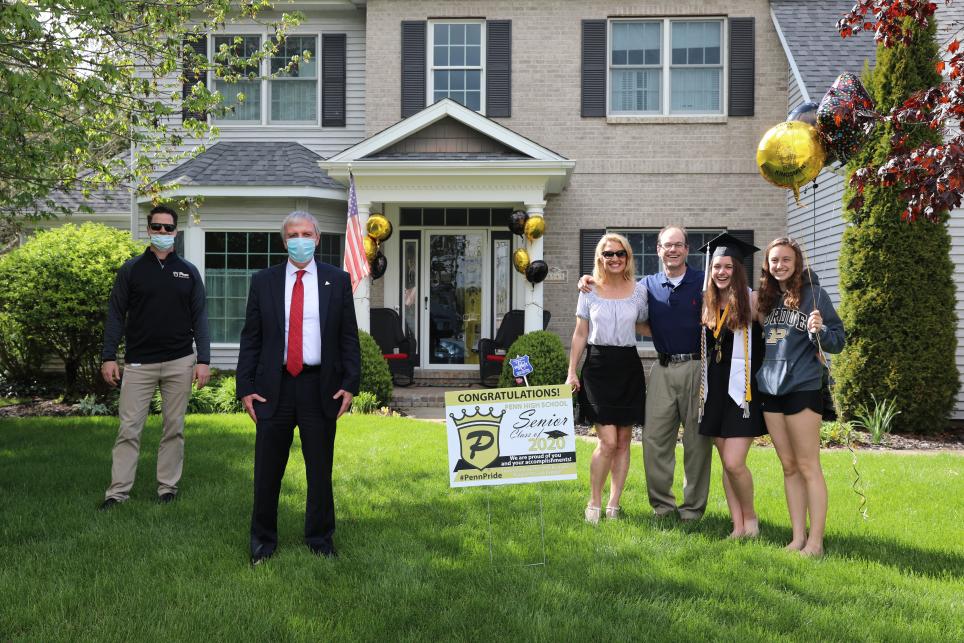 Penn High School will graduate approximately 820 students on Friday, May 29 at 7:00 p.m. in a Virtual Commencement will premiere LIVE on P-H-M District’s Facebook page and YouTube Channel.

Click to preview a pdf copy of the 2020 Commencement program (a version will be printed and given to graduates when they receive their diplomas at a later date). 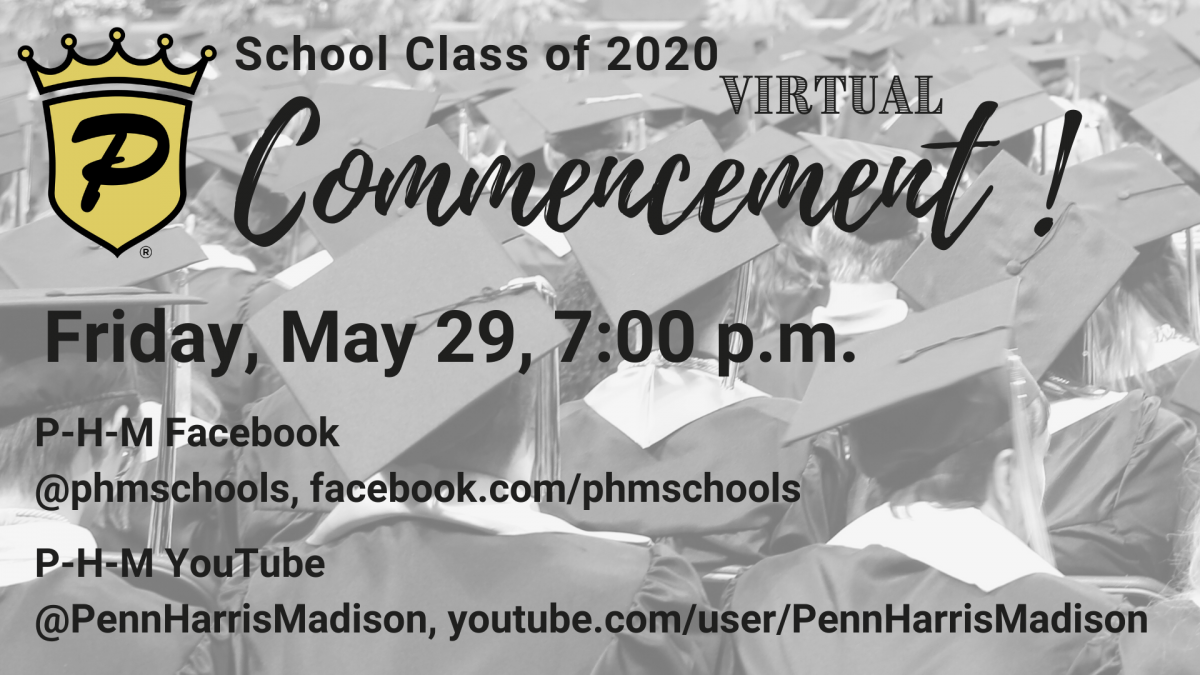 The Class of 2020’s Senior Recognition was held online this year due to the pandemic that shutdown schools. Instead of a Recognition Night ceremony seniors were recognized on Penn’s Facebook and Twitter accounts academic excellence, scholarships, leadership, service to school and community, citizenship, attendance, athletic accomplishments, Academy awards and many other accomplishments. Click here for a full listing of this year’s Academy award winners. Many of the award winners will also be recognized during the Virtual Commencement on the 29th.

This year’s graduating class seniors have earned more than $9 million in scholarships!

There are three salutatorians with an average GPA of 4.3 on a scale of 4.0. This year’s salutatorians are Jack Dinnon, Jeffrey Du, and Josiah Railton

The Principal’s Leadership Award is presented annually to students who contribute their talent, time, energy, and motivation to the leadership of Penn’s student body. Haley Sidorowitz  and Aidan Meuninck were honored for helping to make a difference in the culture of Penn on behalf of their classmates.

The Principal’s Citizenship and Service Award was presented to eight Penn High School students who have selflessly donated many hours to make sure that Penn High School is well represented in whatever service project they’re involved in. The winners of the 2020 Principal’s Citizenship and Service Award were: Elisabeth Casetti, Caroline Dell, Jada Edison, Michelle Kwok, Abigail Nush, Megan Rach, Rachel Santosh, A.J. Tu,

Every year since 1967, Penn’s faculty vote to recognize an outstanding member of the graduating class based on service, character and leadership; the student must also, at the end of seventh semester, be in the top 10% of their graduating class. The senior selected is awarded the Paul H. Schmucker Award in memory of the distinguished member of Penn High School faculty from 1960-1967. This year’s recipient is Abbie Clay.

The graduating class also nominates a classmate who best exemplifies the qualities of service to his/her school community, school spirit, respect for classmates and Penn High School for the Kingsman of the Year Award. A tradition since 1970, the recipient is recognized for his/her leadership and willingness to accept challenge and is a great honor and show of respect from the recipients fellow classmates. The Class of 2020 Kingsman of the Year Award winner is Karen Wang.

Here are some other points of excellence from the Class of 2020:

This is the 3rd co-hort for Penn’s Early College Academy. Here are the highlights from the Class of 2020:

On Friday, May 22, approximately 130 teachers and staff from Penn High School and P-H-M staff and Administration, practicing safety precautions, delivered signs to the more than 800 seniors. Penn Principal Sean Galiher and P-H-M Superintendent Dr. Jerry Thacker paired up to deliver some of those signs. See the pictures below.

To download high resolution jpg files from the photo gallery below, just simply click the “DOWNLOAD” button on the bottom right-hand corner of the photo while viewing it in the Photo Gallery function. We are happy to provide this service to you, free of charge!

Maybe most people would not have a whole lot of confidence in buying a house that was built by high...

On Monday, June 6th, 2022, Penn High School held our 63rd Commencement at the University of...