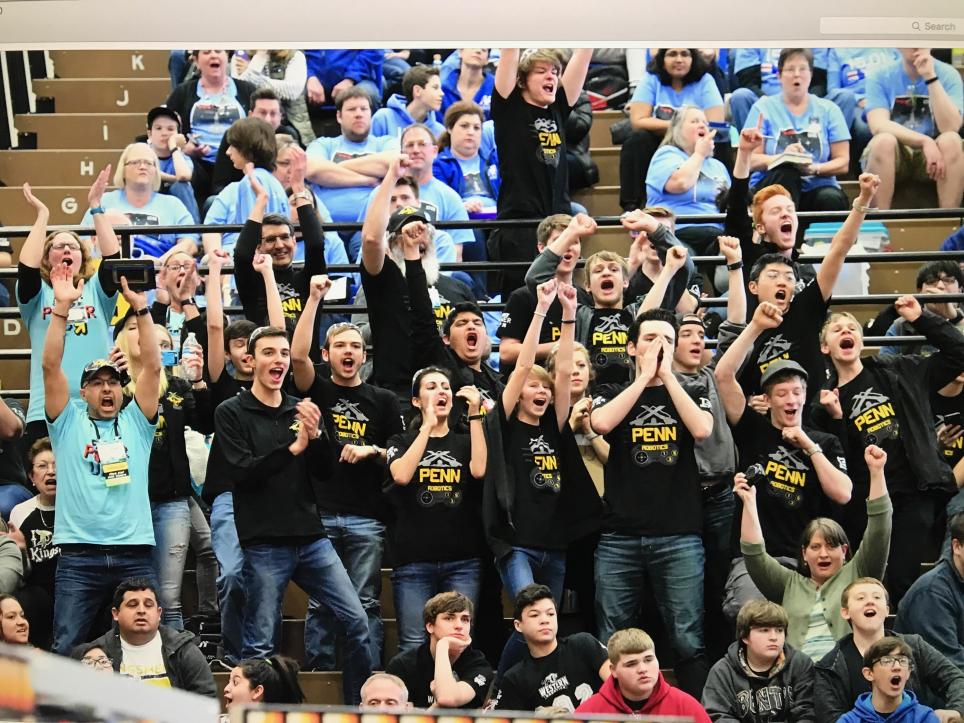 Competitors from more than 40 high schools in Indiana and Michigan, along with more than 5,000 fans and officials packed Penn High School’s Arena for the FIRST Robotics St. Joseph District Event on Saturday, March, 10, and Sunday, March 11.

And by the time that the last robot raced across the field laid out on the Arena floor, one team stood above the rest – Penn High School’s Robotics Team 135.

Click here for a Photo Gallery of the Robotics Competition at Penn on March 10 and March 11.

The Chairman’s Award honors the team that best represents a model for other teams to emulate and best embodies the purpose and goals of FIRST.

By winning the Chairman’s Award, Penn’s Team 135 qualifies for the State Finals on Friday, April 13, and Saturday, April 14, at Kokomo.

The Chairman's Award qualifies team 135 for state. Held April 13 and 14 at Kokomo's Memorial Gymnasium. We will compete against 23 of the top ranked teams for a chance to represent Indiana at the World Championships in Detroit on April 25-29.

"Winning the Chairman's Award puts Team 135 in a small group of very high achieving teams across the world,” Penn Robotics Instructor James Langfeldt said. “Everyone knows we build robots, but the mission of 135 is … to create a new generation of problem solvers and to inspire young minds through diverse experiences."

“When you look at our work on the team, you can quickly see how passionate we are to inspire the next generation of problem solvers,” Langfeldt said. “From summer camps to outreach events, Team 135 is out in front, inspiring people of all ages and interests!”

Langfeldt said that the signature project of Team 135 is Mission to Engineer.

“Mission to Engineer … is transforming the assistive technology community as we bridge teams like ours to people in need of solutions in local communities all over the world,” Landfeldt said. “From prosthetics to software controlled wheelchairs, Team 135 is on a mission to bring low cost solutions to people in need.”