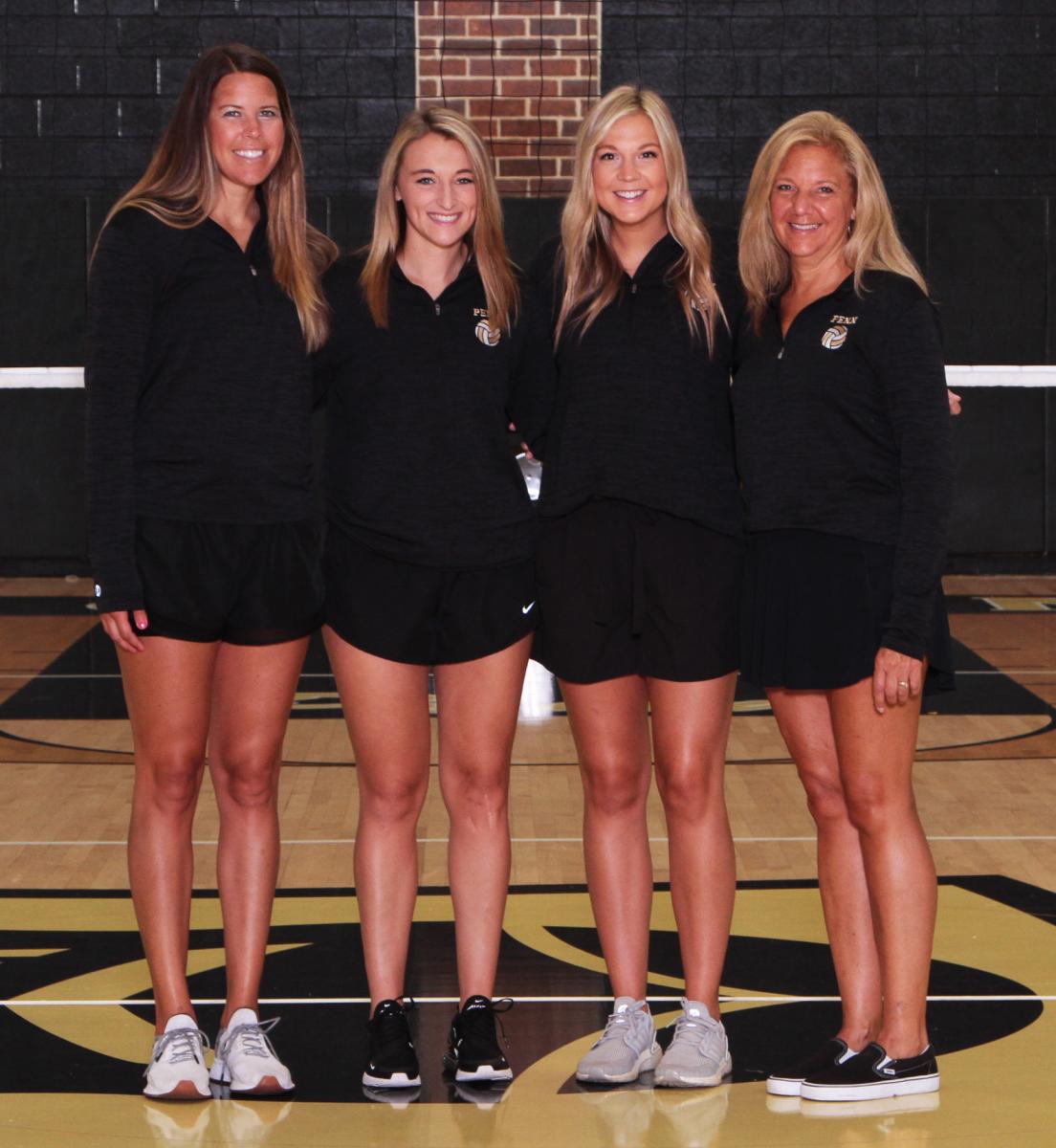 Coach Pawlik brings to this year a record of 849 wins and 247 losses in her tenure as a head coach (entering the 2022 season). Her love of the game, this program she created, and  the passion to coach special student-athletes is why she leads the Penn Volleyball Program.

Under Pawlik’s direction, the Kingsmen developed State Finalist Teams in 1995, 2000, 2004, 2006, 2018, 2020, were State Runner-Up in 2002, and captured the first STATE CHAMPIONSHIP in Volleyball at Penn in 2010.  There are so many memories and little things that make this program one of the elite volleyball programs in the state on and off the court.  She has been blessed with a supportive family with her husband Rod and children Lexie (husband - Nic) & Jeffrey.  The tradition of excellence goes with the honor of representing Penn High School and this community.

There are a few philosophies and ideas that have stuck with me throughout my years of coaching.  I always look for positives when I coach.  If you can celebrate the little things throughout each practice, meeting, and game; the big accomplishments become that much sweeter.  I believe in a family atmosphere.  If you can rely on the people around you to get you through struggles or challenges in practice you are ready to compete for the person standing next to you in a match.  It is each person’s responsibility as a part of my program to put their teammates above themselves.  Success comes to people who believe and have the mentality of, “We is greater than me”.  Lastly, when a player leaves our program they will be a part of a sisterhood.  This sisterhood is to be cherished, talked about, remembered, and honored by the current team.

Coach Banks is entering her fifth season as the Varsity Assistant Coach. She is a teacher at Mary Frank Elementary in the 5th grade.  Coach Banks has changed the lives of many students in the classroom and in our volleyball program.  Her knowledge and expertise with technology and details has brought our program to the next level. Because of her talents we were able to return from COVID challenges stronger and with a positive culture.

Coach Banks was a student-athlete at Penn High School and played four years for Penn’s Varsity Volleyball Team.  During her time with Penn Volleyball, she had the privilege of being the setter a part of the first State Championship in school’s history.  As part of the “Sisterhood,” she recalls her favorite memory of Penn Volleyball to be every opportunity she got to step on the court with her teammates.  The matches were what you went through all the conditioning, practice, and hard work for to be able to compete at a high level.

Coach Banks spent two years at the University of South Carolina and then transferred to Western Michigan University, where she ended her career. While at Western Michigan, Coach Banks led her team to win the MAC Conference Tournament her senior year. They also had the opportunity to be a part of the NCAA Women’s Volleyball tournament. Lexie graduated from Western Michigan in 2016 with a degree in Elementary Education and was married to husband, Nicholas, in 2016.  Coach Banks is expecting their first child in October. Coach Banks’ coaching experience encompasses many ages and she is thrilled to be a part of Penn Volleyball once again in a coaching role.

My coaching philosophy can be summed up in this quote, “There is no easy way to success, just hard work.” I expect each student-athlete to come to practice, game, or conditioning session ready to work hard and compete each day.  I don’t ask them to be perfect, but I do ask for full effort every time they step on the floor.  This will give them the tools to be successful in anything they do.

In high school, Coach Benner played for Penn as an Outside Hitter. Her best memory, although there are many from playing at Penn, is all of the fun activities leading up to the first State (Championship) in school history. “Touring the campus at Ball State and walking into Worthen Arena … the funny part though was when the fire alarm went off in the hotel early in the morning the day of State when we were all sleeping, and all we cared about was grabbing our shoes and our jerseys so we could still play to win state even if the hotel burned down.”

Coach Benner married her best friend, T.J. Benner, in July of 2022. She and T.J. are accomplished volleyball players in the adult community and enjoy these moments of fun and stress relief.

Benner went to Anderson University to pursue her love for volleyball as a collegiate athlete, but injuries got in the way. She returned home to Granger and started school at Indiana University South Bend, where she eventually played as a defensive specialist. While at IUSB, in 2017, her team qualified for the NAIA National Tournament and finished runner-up for conference champions. She graduated in 2018 with a degree in Accounting and Finance. She is currently employed with INOVA Federal Credit Union.

I always strive to help shape all aspects of an athlete on and off the court. A student-athlete isn’t an athlete without the student. My goal is to provide support to all athletes in the classroom, as well as build noble character on the court. Being a coachable athlete with an excessive sense of work ethic is what I love to see.

Coach Dregits is entering her fifth season as the freshmen coach. She has been investing in the lives of students through teaching and volleyball. She brings seven years of high school coaching experience as a JV, Varsity Assistant, and Head Volleyball coach at Jimtown High School.

COach Dregits is married to her husband, Steve, and shares her two wonderful children Harper and Hudson with our program.

Coach Dregits also has extensive playing experience, playing high school volleyball at Illiana Christian High School in the Chicagoland area, where she was a standout athlete. After high school, she went on to play volleyball at Bethel College, where she was a middle blocker.  As an All-American, her team qualified for NCCAA Nationals all four years and her team was NCCAA champions in her final year.

Coach Dregits has an Elementary Education degree from Bethel College. In the past 10 years, she has taught kindergarten, first grade, and fifth grade and now is raising a beautiful family. Outside of volleyball, Coach Dregits enjoys reading, staying active, and watching HGTV.

First, each player plays a vital role on a team and contributes equally.  Some roles may not be as flashy as others, however if you are a part of a team, you are important. Second, hard work and effort show more about an athlete than their God-given talent. Thirdly, my goal is to advance an athlete's skills, but more importantly to develop leadership skills, discipline, and a good work ethic-- all things that will help them be successful after their volleyball career is done.

Markus Burton breaks Penn's All-Time Scoring Record
Friday, January 20, 2023 will go down in “Penn History Books.” It was a sell-out crowd at the ...